The inspiration for this lesson came from my class with Paweł last Friday ( = lekcja). Paweł complained to me that no matter how much time he spent learning English words, he never remembered them later.

A different teacher might have thought that Paweł is lazy. They would have told him that he should study harder, or maybe that he was lying about studying so much ( = uczenie się). But I knew that Paweł is different.

Whenever ( = zawsze kiedy) I asked Paweł a question, he never gave me a straight answer ( = krótka, bezpośrednia odpowiedź). Instead, he started in the middle of the answer, then changed the topic, then came back to the middle of the answer, then jumped around a little bit, and then he admitted he had got lost, and asked me to repeat the question…

That is my idea of hell… But this helped me realize that the inability to ( = brak zdolności do) learn English words was not Paweł’s fault. It was the fault of his brain.

Our brains are divided into two halves, or two hemispheres ( = półkule). The left one and the right one. They have different functions and uses. Sometimes they operate in a balanced way, but very often one of them dominates in a person.

The left brain hemisphere is responsible for logical reasoning ( = rozumowanie), linear thinking ( = liniowe), and language skills. The two brain areas dealing with languages are in the left part of the brain. In me, this left part of the brain dominates very strongly. I love learning from lists and bullet points ( = wypunktowane listy).

The right hemisphere is more creative and spatial ( = przestrzenna). It houses ( = mieści w sobie) imagination and feelings. For Paweł, his right brain is much more active than the left one. He can’t learn from lists of words. He needs something more artistic and intuitive ( = intuicyjne) – such as a mind map ( = mapa myśli). 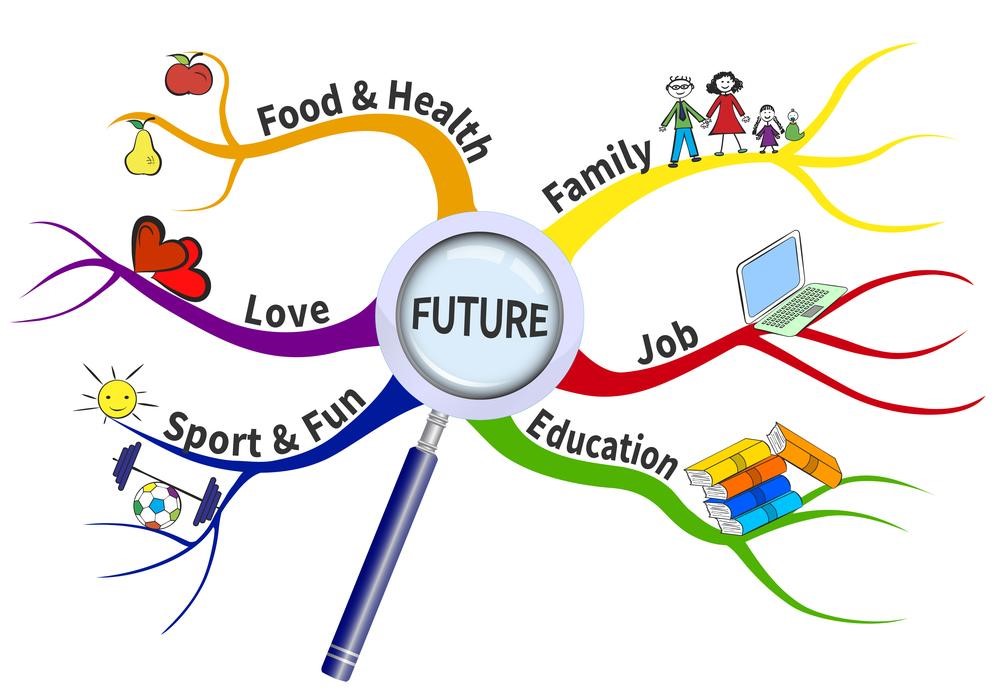 I have two illustrations of the functions of the brain hemispheres. Incidentally, ( = tak się składa, że) they are made in two different brain styles. This one 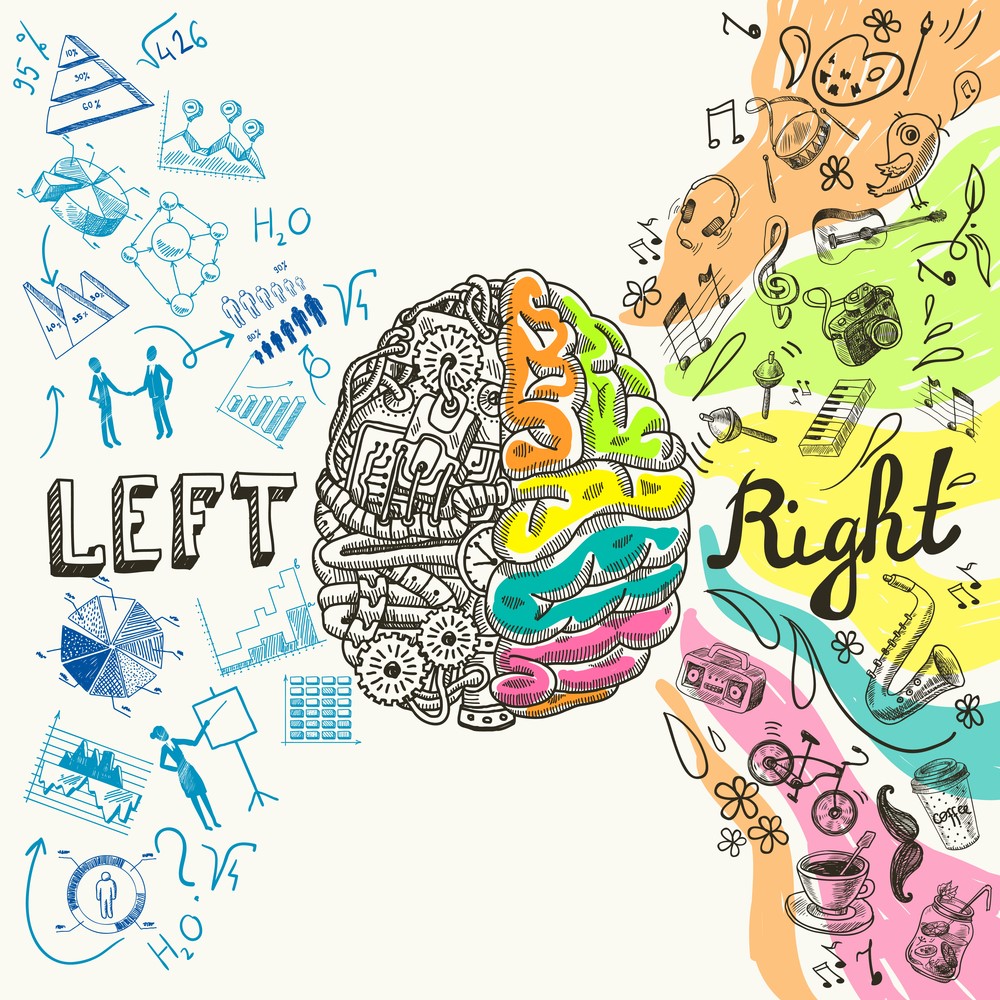 is total chaos and a mess ( = bałagan). So many pictures, colors, ideas… Where do I start?! This illustration is a nightmare ( = koszmar) for my dominant left brain hemisphere, and it makes me panic. Quite literally ( = dosłownie).

On the contrary ( = przeciwnie), this illustration 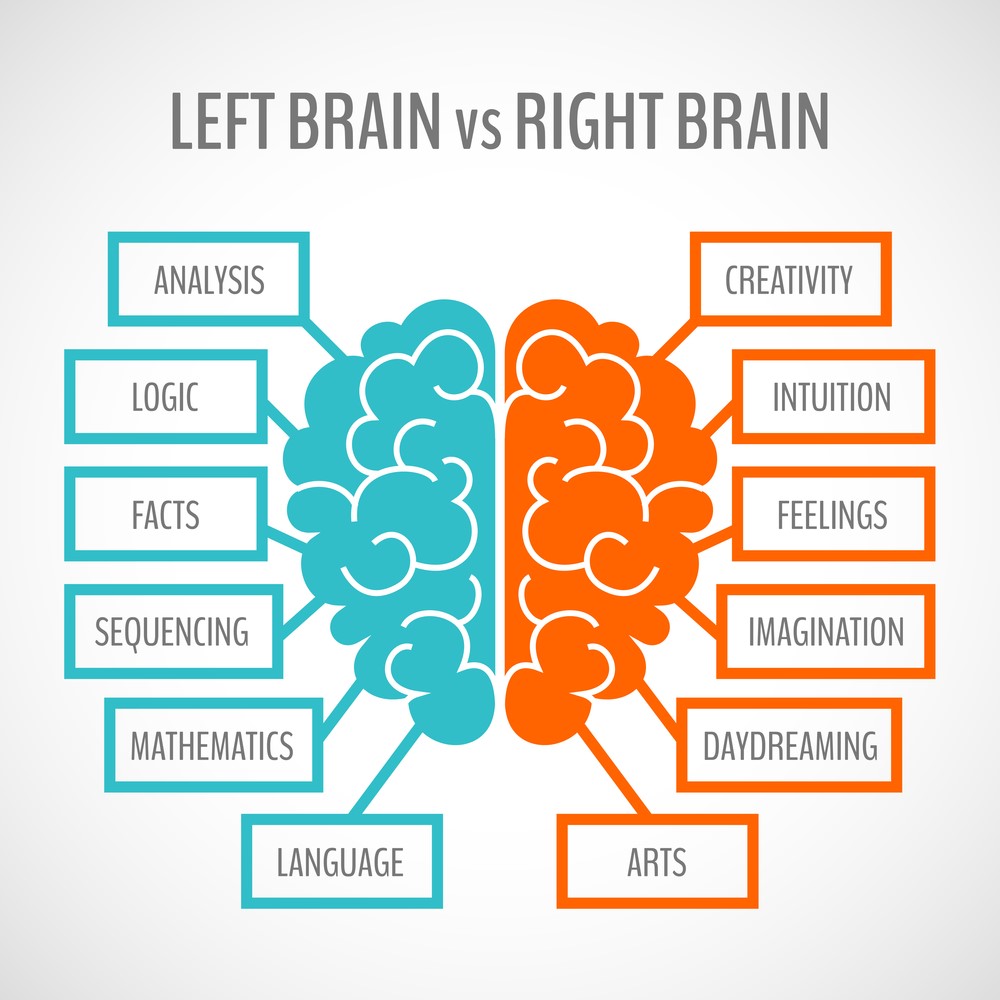 is more friendly for my left brain. It is more organised, with just two colors, more symmetrical and neat ( = schludna). Heaven for me! But hell for Paweł…

If you want to find out which side dominates in your brain, you can take an online quiz – simply google “brain hemisphere dominance test”.

And then, learn English in a way that works WITH your brain, and not against it. For example, try out my courses: audio, video, and text courses of English. For left-brainers, they have lists of words, bullet points, and clear explanations. For right-brainers, they have images, funny stories, and flashcards ( = fiszki) for a mobile app. You’ll find them here: