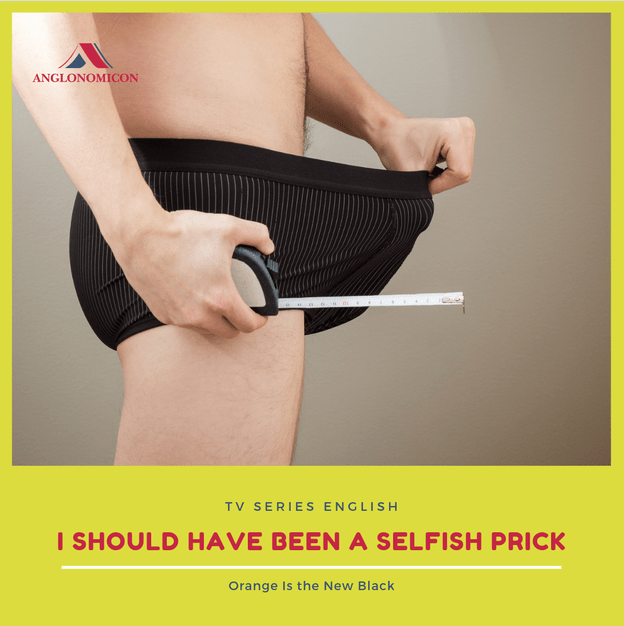 Last week, I wrote about the last episode of “Orange Is the New Black.” I am still very emotional about this series (as I wrote last time, I cried at the end…), so let me come back to it one last time, and share with you some great English I found in it!

The language is from the same scene as last time – when Gloria talks to Luschek. I have for you three juicy pieces of English, all based on one sentence:

“I should have been a selfish prick, just like you.”

Gloria says this, regretting that she’s let others use her phone, and got caught with it. She wishes she had been as selfish as Luschek.

1. a prick – this is a rude word, which originally means… a penis. Yes, you’ve read that right ;). But the second meaning is: an insulting word for a man who you think is stupid or unpleasant. We have a similar word in Polish, which has the same two meanings – it starts with “f” and has four letters ;).

Do you know anyone who is a prick? Maybe your boss? 😉

2. I should have been… – this grammar structure, should have done, is used when you have a regret about something. You did something stupid, and you feel bad about it. A similar structure is I wish – e.g. I wish I had been a selfish prick.

Can you use this structure about your regrets?

3. I should have been… – pronunciation. Most Polish learners pronounce this grammar structure (and similar ones) wrongly. We say “I should HAVE been”, with “have” in its strong form – /hæv/. BUT “have” is very rarely pronounced in this way. Usually, we say /əv/, so “should have” sounds like “shouldev”.

No big deal, you think? This IS a big deal, since 70% of failures of communication come from mistakes in pronunciation! And there are many more words in English which have two pronunciations, and you’re probably using the wrong one. 😉

So, look at your regrets from the previous task, and read them aloud, this time with the correct pronunciation: “shouldev”.

Want to practise the language from today? Write your sentences in the comments, and I’ll tell you if you’re using the language correctly!