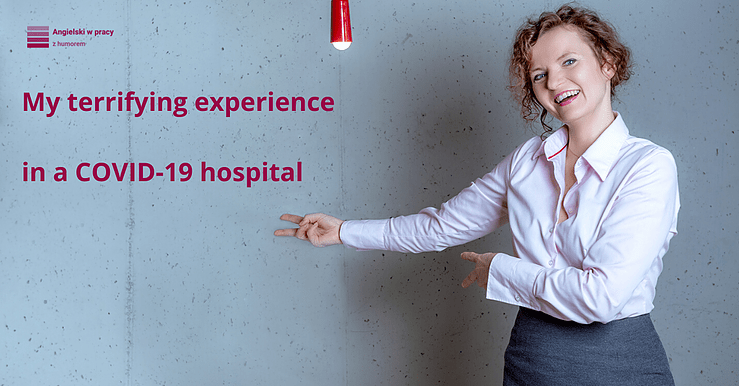 You can also listen to his lesson here: https://anchor.fm/katarzyna-sielicka/episodes/My-terrifying-experience-in-a-COVID-19-hospital-ebncjd

It all happened on Wednesday evening – March 18th– after my class with Ania, one of my online students. During the class, I began to feel hot and short of breath ( = nie mogłam złapać tchu). I felt as if ( = jak gdyby) something was sitting on my chest ( = klatka piersiowa), and it was really hard to breathe.

Let me ruin the suspense ( = zepsuć napięcie) and make a short language detour here, and focus on the difference between the noun: a breath (rzeczownik – oddech), and the verb: to breathe(czasownik – oddychać). They are not only spelt ( = pisze się), but also pronounced ( = wymawia się), differently: a breath /breθ/, to breathe /briːð/.

OK, so I felt really bad during the class. After the class, I went to get some water, and I dropped the mug ( = upuściłam kubek), because my hands were shaking ( = trzęsły się) so badly. I lay down( = położyłam się) in bed, and I started shivering ( = trząść się) all over. And then I heard a ringing in my ears ( = dzwonienie w uszach), and felt as if I was going to lose consciousness ( = stracić przytomność) any minute.

The EMD = Emergency Medical Dispatcher ( = dyspozytor pogotowia ratunkowego) was shocked that a call from Warsaw got put through( = została przełączona) to Kraków. Anyway, after I described my symptoms to her, she said that it sounds like a panic attack ( = atak paniki), and she’s getting hundreds of calls like that every day, and that it’s completely normal in these circumstances. She advised me to breathe deeply and slowly, and to wait for a medical team, who would come to check up on me ( = sprawdzą, czy wszystko ze mną w porządku). She also asked whether I’d been abroad in the last few weeks, and I answered truthfully that I’d come back from Spain 10 days before, but I wasn’t quarantined ( = objęta kwarantanną).

So I started waiting, and breathing slowly and deeply, which only seemed to make things worse – my hands and forearms ( = przedramiona) went numb ( = straciłam czucie), and I felt really weak. In about half an hour, the intercom buzzed ( = zadzwonił domofon), and a paramedic ( = ratownik medyczny) asked if it was true that I’d been to Spain. I said yes. They hung up ( = rozłączyli się).

In another 15 minutes, they called again, and asked to be buzzed in ( = żeby ich wpuścić). I can’t even begin to describe my horror – and I have shivers down my spine ( = ciarki mi przechodzą po plecach) writing about it just now – how terrified I was, when I saw two people in hazmat suits = biohazard suits ( = kombinezony ochronne), like in Hollywood disaster movies ( = filmy katastroficzne). They said that I was being taken to an isolation hospital ( = szpital zakaźny) to be quarantined, and they gave me a face mask ( = maseczka ochronna).

In the ambulance ( = karetka), I couldn’t sit upright ( = siedzieć prosto) and collapsed to the floor ( = osunęłam się na podłogę). I might have passed out for a moment ( = straciłam przytomność), I don’t know, it was all a blur ( = pamiętam to jak przez mgłę). I was shivering all over, my limbs ( = członki = ręce i nogi) went numb, and I felt very cold. Yes, we did have the siren blaring ( = wyła syrena).

In the ER ( = emergency room = izba przyjęć) of Wołoska hospital, I was welcomed by ( = zostałam powitana) even more people in biohazard suits. My hands were disinfected ( = zdezynfekowane), my vitals were taken ( = zmierzono mi podstawowe parametry życiowe) and I was asked to sit tight ( = siedzieć na tyłku) and wait. It seemed everyone was terrified by COVID-19, and the atmosphere was even more stressful because of a hobo ( = menel), who refused to keep his face mask on, and was walking around despite repeated pleas ( = błagania) from the staff( = personel) to sit still.

I was really shocked that I was admitted ( = przyjęta), as in the next few hours I heard that a few ambulances were turned down ( = odesłane, odrzucone), even with patients coming from other hospitals. I felt really lucky, until I heard the doctor say to the person sitting next to me: “You are a confirmed COVID-19 case, but we aren’t keeping you here. I’ve ordered an ambulance to take you home.” Then I started freaking out ( = wariować).

In the next few hours that I spent there, I was witnessing the work of the paramedics, nurses, and the single doctor that was on duty( = na dyżurze). And I have to say that I am full of admiration ( = podziw) for those people. They are heroes. They are underfunded ( = niedofinansowani) and short-staffed (= mają za mało pracowników), they are bogged down in ( = grzęzną w) the typical Polish bureaucracy (“Where’s the referral ( = skierowanie)?” “It’s an emergency.” “Well, no can do( = nie da rady) without a referral.” “But there’s a new hygiene directive, no referrals!” “But I need the paper!”) – an yet they’re doing their best. The hazmat suits are really cumbersome ( = niewygodne) – when you walk in them, you can’t hear anything, and you can hardly hear anything in them in the first place – so their work takes twice as much time as it normally would. Some of them are ill themselves – I saw their temperature being taken. “It’s only 38, you can still work”. They are truly heroes, and I can’t thank them enough for what they’re doing.

Still, I could see that the system was at its capacity( = u kresu wytrzymałości), and even with the ER half-empty (there were only four other patients there), and very few new admissions (maybe one patient per hour, but I think even fewer), it took a few hours before I was seen by a doctor. I had swab tests taken ( = wymazy) from my cheeks and from the back of my throat – through the nose – that was quite awful!, and was sent home. They said I would be contacted within 24 hours with the results.

Well, it’s been almost 2 days, and nobody has contacted me, and I can’t get through to ( = dodzwonić się do) Sanepid. I have no idea what was wrong with me, and what the test results were. And even if they come in negative, maybe I caught the virus in the ER? There is a total paralysis of the healthcare system, and it’s only the beginning of the epidemic in Poland! I dread to think what will be happening later on… Poland is definitely NOT ready for this.

OK, I can feel my heart pounding ( = wali mi serce) when I think of this. I need to calm down. I do hope you are in good health. Take care!

Następny wpis Working in a pandemic