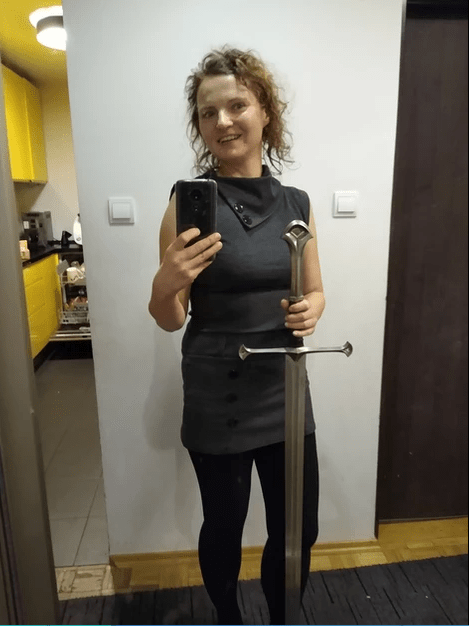 You can also listen to this lesson here: http://bit.ly/2FdGQ4C

Hi there! How are you in the New Year? Have you got over ( = pokonałeś) the hangover ( = kac) from New Year’s Eve ( = sylwester)? If not, it’s high time you did that! ( = najwyższy czas – zauważ czas przeszły “did” – tak samo jak po polsku! najwyższy czas, żebyś to zrobił!)

The beginning of the year is a time when many people make New Year’s Resolutions ( = postanowienia noworoczne). And, quite honestly, I’ve never subscribed to ( = nigdy nie uczestniczyłam w) that load of baloney ( = stek bzdur). Why should a particular date be special, in any way? Why should I resolve ( = postanawiać) to do something, instead of just doing it? Why should January 1st be better than December 20th or February 5th?

Until this year. This year, I do have ( = ależ mam – emfaza) a resolution. I’m going to get my sword back.

OK, now that ( = skoro już) you know how to pronounce it, what sword, you might ask? Well, you probably don’t know that I am passionate about swords ( = miecze to moja pasja). Let me tell you about the one I’m looking for.

I had it made ( = zrobiono go dla mnie) 15 years ago, during my several-year stint ( = epizod) with historical reenactment ( = rekonstrukcja historyczna). What is historical reenactment? It’s basically people dressing up ( = przebieranie się), in line with ( = zgodnie z) a historical time of their choice. Mine was late Middle Ages ( = średniowiecze) and the Renaissance. And, after you dress up, you dance the period dances ( = historyczne) and fight with period swords. Period 😉 ( = kropka).

So of course I had the whole lot ( = wszystko), medieval ( = średniowieczne) clothes of all sorts, 16th century too, an épée /ˈepeɪ/ ( = szpada) and… the sword. The sword was made for me by one of the best blacksmiths ( = kowal), Marcin “Węglu” Węgliński. It was a bastard sword ( = miecz półtoraręczny, dosłownie: bękart), which means it’s heavy enough to be used in both hands, but light enough to occasionally swing it ( = machnąć) with one. Since it was made for a girl (me, that is!), it was slightly shorter and thinner than a regular bastard sword, so that I could swing it more easily.

It also had a sheath ( = pochwa, ale tylko pochwa miecza. Ta druga pochwa… to „vagina”). On the sheath, it had engraved ( = wygrawerowane) its name. And that was the point where the sword, alas ( = niestety), stopped being historical, and crept into ( = wkradł się) the realms ( = królestwa) of fantasy. The name of the sword was Valarauko, which means “the Demon of Might” ( = moc). And that’s the nickname ( = ksywka) of Balrog from the Lord of the Rings. To make matters worse ( = na domiar złego), the name was engraved in Quenya – Elven runes invented by Tolkien. Ooops…

Anyway, I had lots of fun with the sword, and did my share of hacking and slashing ( = rozwałka). Then ordinary life took over, and I gave up my passion. And a few years later a financial crisis came, and selling all of my unused stuff seemed like a good idea. So I sold most of the reenactment paraphernalia ( = akcesoria), including the sword. And I regretted that the moment I did that. It was like selling a baby, a part of myself, the only piece of magic in my down-to-earth ( = przyziemne) life. Like losing a kidney ( = nerka), basically… 😉

And I missed it, every day, for the next 6 years. Until, in December, I decided to get it back!

After a lot of searching, I finally found it – exactly on my 40th birthday, December 31st – in a galaxy far, far away, namely in Sandomierz! I found Szymon, who bought it from me 6 years ago, and has kindly agreed to return it to me in exchange for another sword! So now I have another quest ( = misja): I’m looking for a good sword for Szymon. Węglu seems to have gone off the grid ( = wydaje się, że zapadł się pod ziemię), and I have no idea where to look! But I will persevere ( = wytrwam)! I will not give up, till I have my baby back! 😉 Wanna help? If you know a good sword manufacturer, do let me know!

In the photo below, you can see me with another sword. This is Anduril. Doesn’t ring a bell? ( = nie dzwoni? w żadnym kościele?) Anduril is the sword of Aragorn. Are you still clueless? ( = zielony, nie wiesz o co chodzi). That’s the hunk from the Lord of The Rings ( = ciacho. Nie do jedzenia, tylko facet. Chociaż w sumie, to dlaczego nie do jedzenia… 😉 ). Still no idea what I’m talking about? OK, I give up. I prefer Legolas, too… 😉

So, now you know about my resolution – to get my sword back! And what are your New Year’s Resolutions? Do let me know!

PS. If your resolution is to learn more English ;), you can still join the How you doin course. We’re learning English for work from the Friends sitcom! We’re half-way through, still a few weeks left to go, and you’ll get all the previous lessons right after joining. Check it out here: https://www.anglonomicon.pl/kurs-angielski-praca-sitcomy

PS2. To those of you who have listened to the audio version: would you prefer the audio just in English, or also with Polish explanations? Reply to this email to let me know :).