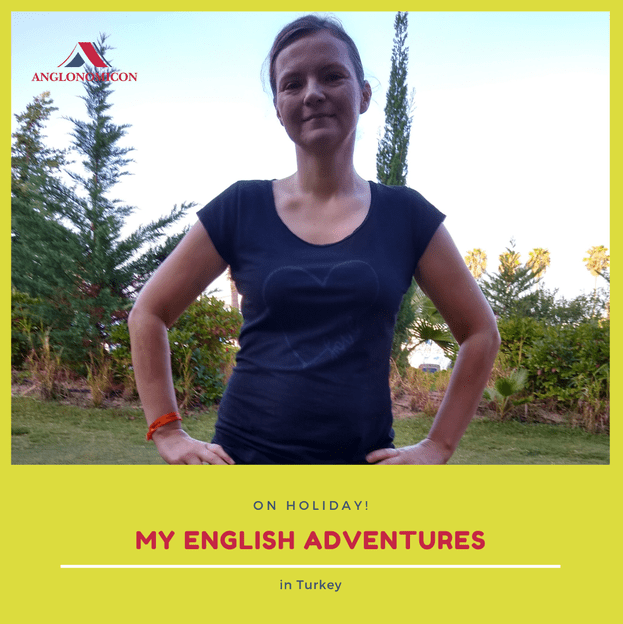 I’ve been away for a while, relaxing on a great holiday in Turkey! And I’d like to tell you about some adventures I had there, involving English! 🙂

The holiday started with some epic (= very big) packing failures. I started by almost forgetting to pack my kids’ PJs (= pajamas, clothes for sleeping). I packed them literally (= dosłownie) at the last moment, when the realisation mercifully (= miłosiernie) struck me the moment I was leaving home for the airport.

The second packing failure involved my toothbrush. Those of you who know me a little – you know that I’m a bit obsessed with dental hygiene. I never travel anywhere without my Philips Sonicare sonic toothbrush (no, they aren’t paying me for advertising!). So, I took great care not to forget it also this time. I carefully wrapped the charger (= ładowarka) (it comes in two parts) and the body of the toothbrush – it’s rather bulky (= big and inconvenient). And I wrapped the detachable (= which can be removed) head of the toothbrush. But when I arrived in Turkey, I couldn’t find the head anywhere – it was gone! So, I had the charger and the body, but no head – the toothbrush was useless! I rushed (= hurried) to the hotel shop to get what I thought would be the most expensive toothbrush in my life – but it wasn’t so bad. And I spent the next 8 days brushing happily away with a manual (= ręczna) toothbrush. When I came back home, I looked for the head, but it was nowhere to be found. I eventually (= finally) found it… in my suitcase! It had been with me all the time, I just couldn’t find it!!!

Anyway, I was supposed to (= miałam) talk about English, and not about packing! At first, I was pleasantly surprised by the English spoken by hotel staff in Turkey – it seemed that everyone spoke fluent English! That was a welcome change after my last year in Bulgaria, where no-one spoke English, and I had to rely on my rusty (= zardzewiały, zapomniany) high school German. And in Turkey, everyone spoke English! Well, that turned out to be deceptive (= zdradliwe).

My first communication failure took place right at arrival, before we even checked in. When our transfer coach arrived at the hotel, it was 13:50. The receptionist said to me: “Lunch is in ten minutes, later you check in.” And he pointed to the hotel restaurant. Honestly, I did not expect lunch on the first day, so that was a pleasant surprise. We loitered around (= kręciliśmy się) for 10 minutes, and then went for lunch, which… had already finished! It turned out that he should have said “Lunch will be OVER in 10 minutes,” instead of “Lunch will be in 10 minutes.” Argh! We spent the afternoon hungry…

The second adventure was connected with shooting. The hotel offered a wide range of activities – for kids and adults – and one of them was shooting a rifle (= karabin, strzelba). It was my first time with a rifle, so I had no idea whatsoever (= zupełnie) what to do. I put the rifle on my right shoulder, and the instructor said, “Cross your left eye and look into the sights (= celownik).” I was a bit shocked – why would I cross eyes? Why look right with my left eye? But he was the expert… It was all terribly uncomfortable, and after a few shots, when he kept shouting eat me: “Cross your left eye!” again and again, I realized that me meant “close,” not “cross”! He was just mispronouncing the word! So I was supposed to CLOSE my left eye, not cross it! That made much more sense!

And the results of the shooting? My first shot missed the target completely, and hit the wall instead (but hey, I didn’t shoot anyone on the sides!). The second was closer to the target, and the third hit the target! I scored 3 points! 🙂

So, next time you’re on holiday abroad, be careful with non-native speakers speaking English! They might be making mistakes which lead to communication failures!

Well, as Bugs Bunny said, that’s it, folks! If you want to know more about my Turkish holiday, and the other adventures I had there, let me know! 🙂