Your boss is NOT mobbing you. Believe me, it’s impossible!

Mobbing is one of the most frequent workplace complaints of Polish people. My students often say that they are victims ( = ofiary) of mobbing. And when I ask them to describe the problem, they say it’s connected with their boss. And this is NOT what mobbing means in English!

Somehow it happened that there are two languages in the world in which “mobbing” means something different from the original English word. These languages are: Polish (yes!) and Spanish or Italian or something like that… And this is quite shocking, actually, that during the process of borrowing ( = zapożyczanie) we changed its meaning! There was a process of semantic shift ( = przesunięcie znaczeniowe).

As a result, we have funny – or rather tragic – misunderstandings between Polish workers and their managers who are native speakers. When my students complain to their American bosses that they are victims of mobbing, the Americans get totally confused about the exact nature of that mobbing. Because mobbing in English is something different.

So, what is mobbing? It comes from the word “a mob,” which means a large noisy group of people, which is difficult to control ( = motłoch). This can be an excited group of people, or an angry one, who want to hurt you. So it’s never one person, it’s always a group. 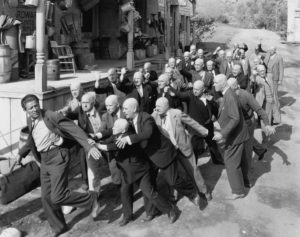 In addition to “a mob,” there is also “The Mob.” And this is an organised crime group. The mafia! For example, “He was imprisoned for being a killer for the mob.” So, THE mob is also a group of people!

As you can imagine then, mobbing is a behaviour of a group of people towards an individual. This could be humiliation ( = upokorzenie), violence, physical or verbal abuse ( = znęcanie się). But it’s always a group of people going it – never an individual. Your co-workers could be mobbing you – if they get together to be nasty to you. They can hide your yogurt in the fridge. Or they can start a plot ( = spisek) and blame all the workplace failures on you, making you the culprit ( = sprawca, osoba winna). Then your co-workers are a mob, and they are mobbing you.

Your boss is not! 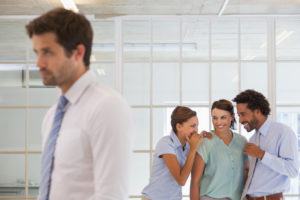 So what is your boss doing to you? Well, he or she is bullying you. This word comes from primary school, where a bully is a stronger, older student using violence against smaller kids ( = byczek). He would say “Give me your sandwich, or I’ll punch you in the face.” So he abuses his physical strength to hurt the weaker.

And this nicely translates into office politics, because your boss has power over you. So they can tell you: “You have to work overtime ( = pracować po godzinach) today, or you’ll be fired.” They abuse their position of power to get what they want from you. So, your boss might be bullying you. 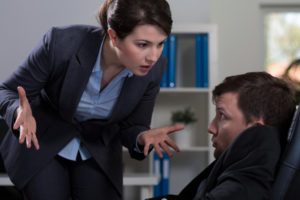 The last word for today is harassment.  Bullying is a form of harassment. And harassment is any kind of behaviour which is nasty towards someone. We often speak of sexual harassment – unwanted sexual advances ( = niechciane podrywy). There is also textual harassment – when somebody texts you ( = wysyła smsy) in an annoying or humiliating way. We can also have racial harassment, which targets racial minorities. 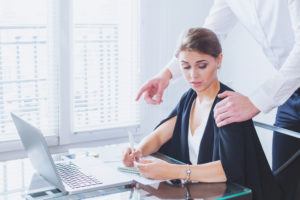 So harassment can be used by anyone towards anyone. And if your boss does that, then he uses his position of power, so that kind of harassment is bullying. And when all of your colleagues are against you, that’s mobbing.

So, as you can see, your boss is NOT mobbing you!

Następny artykuł It’s my birthday… but the gift is for you!