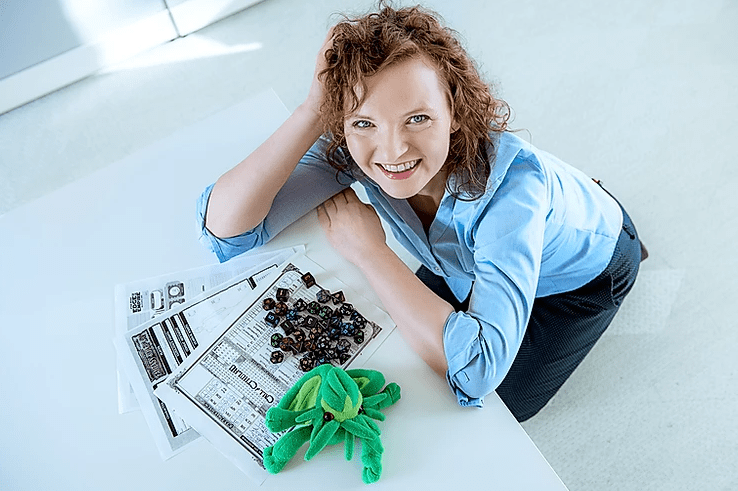 How do you unwind ( = relaksować się) after a hard day at work? Some people choose pretty unadventurous ( = konwencjonalny) pastimes( = rozrywki), such as doing sports, reading books, and watching films. Others, however, boldly ( = śmiało) go where no man has ever ventured ( = zapuścić się) before – maybe you’ve recognized the allusion to Star Trek – and do more out-of-the-box ( = oryginalne) stuff, such as roleplaying games.

You might be tempted ( = może cię kusi) to say: ah, RPGs, like Diablo and The Witcher on my computer or console! Well, no. These are cRPGs – computer role playing games, which have precious little (= bardzo mało) to do ( = wspólnego) with the real, pen-and-paper RPGs. But yep, they might be a good start!

It’s hard to understand what RPGs are without actually( = rzeczywiście) trying them by yourself. It’s like trying to explain what strawberries taste like. Or describing the sunset ( = zachód słońca) to a blind ( = ślepy) person. Or the Beatles’ music to the deaf ( = głusi).

So, it’s a daunting challenge ( = trudne wyzwanie), but let’s try! A role playing game is a game of imagination and collective ( = zbiorowe) story-telling. In practice, what you can see is a group of people sitting around a table and talking. In front of them, you’ll have some papers, and some dice ( = kostki do gry). The dice are not your typical six-sided dice, but they come in many more varieties: with 4, 8, 10, 12, 20, or even 100 sides.

One of the people is the Game Master. This is kind of the director of the film. He (or she) starts the story, so for example they will say: “You are in a dark forest. You can hear the crying of a child. Do you go to investigate ( = zbadać)? Or do you think it’s an ambush ( = zasadzka) and move on?” Then the other people – the players – have to decide what they do. Or rather, what their characters ( = postacie) will do. This is similar to actors playing some characters in films. We can’t say that Leonardo DiCaprio is in love with Kate Winslet. But Rose and Jack – very much so(= owszem)! So every person (player) controls a hero (character), and says what the hero does in the story narrated by the Game Master. That’s it! 🙂

Each session takes a few hours, and is an exercise in imagination, cooperation, but also independent decision making. Everyone has lots of fun, excitement, and laughter ( = śmiech). Sounds voodoo? You have to try it!

Personally, I am a keen ( = zapalony) RPG player. I have just finished campaigns ( = kampanie) in Call of Cthulhu, FFG Star Wars, and Warhammer. And this weekend I am about to start (zaraz zaczynam) The World of Darkness, and the Lord of the Rings. I have tried GM-ing ( = mistrzowanie), but I was hopeless at it ( = beznadziejna), so now I resort to (uciekam się do) playing only ;).

In the photo, you can see some of my character sheets( = karty postaci), some dice, and a plush ( = pluszowy) Cthulhu. You might know Cthulhu if you’ve read works by Lovecraft. The little green guy is evil incarnate ( = zło wcielone), a fictional cosmic entity whose only aim is to wreak havoc ( = szerzyć zniszczenie) and spread chaos ( = rozprzestrzeniać chaos). But he’s so cute!

Last weekend, I played some RPG sessions at Zjava, a get-together of RPG fans and board game ( = planszówka) maniacs. If you want to watch my mini-interview with Kuba, one of the organisers of Zjava, click here: https://www.facebook.com/AngielskiwPracyzHumorem/videos/2722525724529817/

Are you an RPG fan yourself? Let me know! 🙂

Następny wpis I hate my boss